Here's a little bit about the guys !

_  Colby shared his interest in playing the accordion with his parents late in his high school years. His parents refused to invest in purchasing one until he proved that he would learn and stick with it. His great Uncle Cliffy gave Colby his old accordion and that is how he got started. Later a friend loaned him one and several people showed him different chords.  That Christmas, Robby heard Jamie Bergeron had one for sale & he purchased it as a Christmas gift for Colby.   The following year Colby finished his EMT course and was hired with Acadian Ambulance Service and who do you think he was partnered with......Jamie Bergeron!!
Colby understands a little French but has learned to sing it. When he hears a song he likes, he goes meet with his Granny and she translates it to him & teaches him the correct pronunciation.  He now owns & plays three accordions. 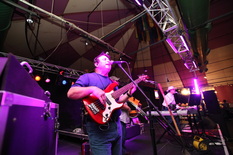 _ Robby runs the band, plays bass, sings and takes care of the sound.
But as kids Robby & his brother, Chad played around with the piano their mother had. It wasn't until late in high school they began seriously playing piano & started up a band.  They both played piano & sang but started having problems keeping a bass guitar player.  Robby was loaned a bass guitar by his uncle and had been learning it slowly.  That is when Robby decided he wanted to play the bass in the band.  Robby's dad told him and Chad, that if and when he could play a whole gig he would buy him a bass and amp. And ......so one month later... Robby was the new bass player !!  Oh yeah with a new Bass and Rig !!
One of his greatest joys - playing music with his son and brother.